Getting the best from your load pin

This article provides both basic an detailed information to assist specifiers in the correct selection and application of Load Pins. We would highly recommend reading this, it will be of great help to you.

Load measuring pins are designed for many diverse applications as direct replacements for clevis or pivot pins. They have many advantages over other load sensors in that they do not normally require any change to the mechanical structure being monitored. Load pins are typically used in rope, chain and brake anchors, sheaves, shackles, bearing blocks and pivots.

A load measuring pin senses the force applied across it, via strain gauges installed within a small bore through the centre of the pin. Two grooves are machined into the outer circumference of the pin to define the shear planes, which are located between the forces being measured.

As the instrumented area of the load pin is totally contained within a small central bore, the load pin sensor is inherently waterproof. Manufactured from special stainless steels, fitted with welded or `O' ring sealed end caps and with special attention to the signal cable glanding, a very high operating reliability can be guaranteed even for load pins operating underwater.

If a pin exists within a defined load path or can be fitted to experience a force, then an CX Load Pin can be installed to monitor that load. The sketches below show typical locations for load pins.

A load-measuring pin needs to be securely locked into position in order to fix its orientation with respect to its associated assembly. This needs to be fixed, both in the axial and rotation modes, to ensure that accurate and repeatable results are obtained from the system.

A standard load pin is designed to sense the force in one direction only. A force at right angles to that force will produce a zero output from the sensor.

The signal cable can normally exit from the load pin to suit the installation and space requirements. Emphasis should be placed on the protection of the cabling system from accidental damage during installation and use. A plug and socket breakdown can be incorporated at the load pin if required. Extra protection can be provided over the standard polyurethane sheathed cable in the form of hydraulic hose. This provides excellent protection with the advantage of associated fittings being readily available.

The following table shows the CX range of standard load pins within the range of 2.5 to 50 tonnes. Most pins, however, do not match these exact dimensions and are therefore custom designed to suit a specific location and application. There is no extra cost for the design of a custom pin. 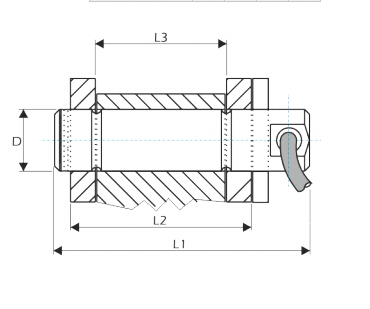 Special high strength steels are used in the manufacture of all CX load pins to optimize on the load bearing capabilities of any one design of pin. There is always, however, a compromise between output signal and ultimate strength of any load pin design. For a load pin in double shear, the graph below indicates optimum load ratings for given pin diameters.

If a pin is being designed into an assembly without restrictions in size for a given load rating, then the design should be aimed at the optimum curve as shown. However, many load pins are designed to retrofit existing structures and will not always fall into the ideal range.

The high side of the graph indicates a load pin that will give an output of 2.5 to 3.5 mV/V for a given load but with some degree of compromise on the ultimate safety factor of that pin.

The lower end of the graph will produce a load pin, which has either a low output at its rated load or has to be machined with excessive shear notches to create enough signal. At the very low end we would normally propose a bushed load pin - details available on request.

Various factors influence the performance of a load pin when it is put into service. The majority of load pins are designed to fit existing structures so that each design is dependant on the size and constraints of that structure. If a pin is subjected to a high load, in relation to its diameter (see load rating graph) then it will not perform as well as a pin that is designed to fall within the optimum or low range of that graph.

A rigid support structure is required to minimize the bending forces imparted on to the pin. The pin works by sensing the shear and any bending stresses within the pin will degrade its overall accuracy. The fit of the pin within its mating holes is important in the overall performance of the load pin. For an "optimum" range pin, an H7, g6 fit would normally be recommended, however this is not always achievable in the field and some slight loss of repeatability and linearity can normally be tolerated at the expense of an `easy to fit' requirement.

Bearing stresses, and overall proportions of the pin are always taken into consideration with the design of a new pin. We will always endeavour to optimize the performance of any pin (within its service structure) given the restraints placed upon it. The key consideration in the performance of any load pin is that if there is no change in the geometry of the pin, the loading structure or loading conditions, throughout the range of the pin (0 -100%), then a high performance can be expected. Even minimal bending of the structure, changes in bearing areas or bending of the load pin (if highly loaded) will have an effect on performance however repeatability is unlikely to be affected.

Load pins are normally calibrated in half or full blocks in a traceable compression test machine. When a load pin is supplied as the sensing member of a shackle, we would normally calibrate the total shackle assembly in tension.

We endeavour to match the loading conditions that would be experienced in service but it would be unrealistic to totally simulate the on-site structure for every load pin manufactured. It is for this reason that for optimum system accuracy, a calibration in the final assembly is recommended.

If the angle of force, as applied to the standard load pin, varies in service, either by changes in wrap angle or by some other exterior factor then there will be a loss in output of that pin as shown in the graph over. It will be noted that up to +/-8 degrees of loading variation can be accommodated before a loss of 1% in signal output is recorded

Where a high degree of angular variation will be encountered an X/Y load pin can normally be offered. This will provide two outputs, as described by the following graph, which can be read simultaneously to compute the true resultant force applied to that pin. The direction of force, as applied to the pin, can also be computed from polarity and magnitude of the X and Y signals.

The angular orientation of the load pin, in its associated mechanical assembly, will depend on the angular window of operation of that pin. This needs to be defined in order to optimize the installation and results from that pin.