test finger nail Non-detachable parts that protect against access to live parts, moisture or contact with moving parts shall be fixed in a reliable manner and withstand the mechanical stress occurring during normal use. Snap-in devices used for fixing such parts shall have an obvious locked position. The fixing properties of snap-in devices used in parts that are likely to be removed during installation or servicing shall be reliable.

Compliance is checked by the following tests.

Parts that are likely to be removed during installation or servicing are disassembled and assembled 10 times before the test is carried out.

NOTE Servicing includes replacement of the supply cord, except in appliances with a Type Z attachment.

The test is carried out at room temperature.

The test is applied to all parts that are likely to be detachable whether or not they are fixed by screws, rivets or similar parts.

A force is applied without jerks for 10 s in the most unfavourable direction to parts likely to be weak. The force is as follows:

• if the shape of the part is such that the fingertips cannot easily slip off, 50 N;

• if the projection of the part that is gripped is less than 10 mm in the direction of removal, 30 N. 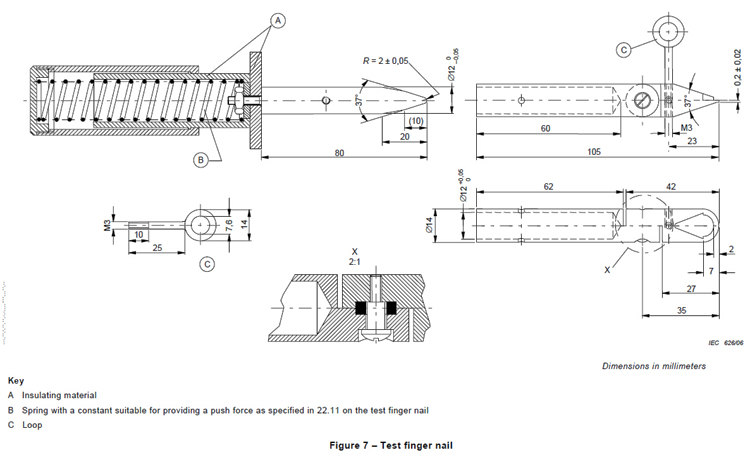 If the shape of the part is such that an axial pull is unlikely, the pull force is not applied but the test fingernail is inserted in any aperture or joint with a force of 10 N and is then pulled for 10 s by means of the loop with a force of 30 N in the direction of removal.

If the part is likely to be twisted, the following torque is applied at the same time as the pull or push force:

This torque is also applied when the test fingernail is pulled by means of the loop.

If the projection of the part which is gripped is less than 10 mm, the torque is reduced by 50 %.

Parts shall remain in the locked position and not become detached.